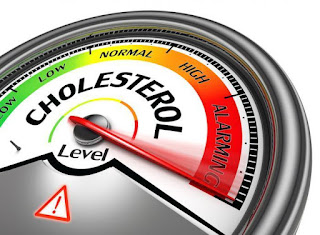 Since I was a little girl and able to understand scary stuff, my mother said that her body “manufactured” too much cholesterol. Never mind the fatty foods she ate like red meat and extra buttery toast and cheesecake, her favorite dessert. She stood by her story to the end. I was scared I would inherit the same “manufactured” condition. But I was spared even though I had a hemorrhagic stroke that was from Protein S deficiency. (Don’t get me started on a lousy gene pool).

My mother probably familial hypercholesterolemia, this news  brought you by US National Library of Medicine, a disorder that is passed down through families. It causes LDL (bad or think of loathsome) cholesterol level to be very high. The condition begins at birth and can cause heart attacks at an early age. My mother didn’t have a heart attack, but she could have had one.

Familial hypercholesterolemia is a genetic disorder. It is caused by a defect on chromosome 19. The defect makes the body unable to remove low density lipoprotein (LDL, or bad) cholesterol from the blood. This results in a high level of LDL in the blood.

This condition makes you more likely to have narrowing of the arteries from atherosclerosis at an early age. The condition is typically passed down through families in an autosomal dominant manner (that is, inheriting a disease, condition, or trait depending on which type of chromosome was affected).

And that’s probably what she meant by manufacturing high cholesterol. So I thought to myself, I’m lucky that I escaped the high-cholesterol syndrome, and now that I am a pescatarian or, as I like to say, a vegan with fish. That got me thinking: Can your cholesterol be too low? The answer scared me more.

In April of 2019, a study by the American Academy of Neurology said that low cholesterol was linked to a higher risk of “bleeding [hemorrhagic] stroke” in women.

A study found out that women who have levels of LDL cholesterol 70 mg/dL or lower may be more than twice as likely to have a hemorrhagic stroke than women with LDL cholesterol levels from 100 to 130 mg/dL.

“Strategies to lower cholesterol and triglyceride levels, like modifying diet or taking statins, are widely used to prevent cardiovascular disease,” said Pamela Rist, ScD, study author of Brigham and Women’s Hospital in Boston and a member of the American Academy of Neurology.

“But our large study shows that in women, very low levels may also carry some risks. [I’ll say]. Women already have a higher risk of stroke than men, in part because they live longer, so clearly defining ways to reduce their risk is important. Women with very low LDL cholesterol or low triglycerides should be monitored by their doctors for other stroke risk factors that can be modified, like high blood pressure and smoking, in order to reduce their risk of hemorrhagic stroke.

“Also, additional research is needed to determine how to lower the risk of hemorrhagic stroke in women with very low LDL and low triglycerides,” Rist said.

My head was spinning. Low cholesterol and low triglyceride are considered bad now? I wanted to find out more.

The study of 27,937 women age 45 and older participated  in the Women’s Health Study (supported by the National Institutes of Health) who had total cholesterol, LDL cholesterol, high density lipoprotein (HDL or good cholesterol), and triglycerides measured at the beginning of the study. Researchers reviewed tons of medical records to determine how many women had a hemorrhagic stroke.

Some other factors were weighed in that could affect risk of stroke, such as age, smoking status, high blood pressure and treatment with cholesterol-lowering medications, and researchers discovered that those with extremely low LDL cholesterol were 2.2 times more likely to have a bleeding stroke.

The study’s key limitation was that cholesterol and triglyceride levels were only measured once at the beginning of the study. In addition, menopause was evident in a large number of the women, which prevented researchers from examining whether menopause status may be the missing link between cholesterol and triglyceride levels and bleeding stroke. More study is needed.

Through blood tests, CBC and Lipid Panel, and vitals like blood pressure, you can fill in the blanks on the form to see if you’re susceptible to a heart attack or stroke. Shouldn’t you know rather than guess?

Statins are effective at lowering cholesterol and protecting against a heart attack and stroke, although they may lead to side effects for some people.

The Mayo Clinic says that doctors “often prescribe statins for people with high cholesterol to lower their total cholesterol and reduce their risk of a heart attack or stroke.” But they have been associated with the onslaught of muscle pain, digestive problems, and mental confusion in some people who take them and may cause liver damage, albeit rare.

Statins include:
The reason that doctors prescribe statins is that that block a substance your liver needs to make cholesterol, and causes your liver to remove cholesterol from your blood.
If you’re already on statins, talk to your doctor before stopping them. My doctor told me to stop reading articles on the Internet. Hoo, boy. Like that’s gonna happen.
If you have muscle pain, the statin you’re on may be producing  rhabdomyolysis which can cause severe pain, liver damage, kidney failure, and death. The risk is very low, and numbers are equal to a few cases per million people taking statins. Rhabdomyolysis can happen when you take statins in combination with certain drugs so ask your pharmacist.

Or statin use could cause an increase in liver inflammation. But if the increase is severe, you may need to try a different statin because all statins are not alike. Again, talk to your doctor, if you also have unusual and increased fatigue or weakness, loss of appetite, pain in your upper abdomen, dark-colored urine, or yellowing of your skin or eyes.

It also possible your blood sugar level may increase when you take a statin, which may lead to developing type 2 diabetes.
The risk is barely significant but important enough that the Food and Drug Administration (FDA) has issued a change on warning labels regarding blood glucose levels and diabetes with statin use prevalent.

Also, the FDA issues a warning on statin labels that some people have memory loss or confusion while using statins.

Everyone who takes a statin may not experience side effects.

If your doctor says it’s fine, take a small break from statin and see whether the muscle aches or other problems you’re having are statin side effects. It may be just part of the aging process.

Or switch to another statin drug if that’s ok with your doctor.
Or change your dose with the doctor’s permission. Another option is to take the medication every other day, especially if you take a statin that stays in the blood for several days. Again, talk to your doctor.
More than usual exercise may increase the risk of muscle injury. And it’s difficult to know if your muscle pain comes exercise or a statin.
One more thing. Is your diet healthy enough not to produce high cholesterol and, by the way, high triglycerides? My mother, again, probably had Familial hypercholesterolemia, the inherited gene that you could help by eating healthy, exercising, and not smoking, all of which my mother did not do.